The area around Nags Head is rich in history and in folklore. Virginia Dare, the first English child born in the New World, disappeared in 1587 from nearby Roanoke Island. Blackbeard is said to have roamed the waters of the Roanoke Sound and rumored to have lost buried treasure beneath the shifting sands of Nags Head’s giant dune, Jockey’s Ridge. The Wright Brothers flew the first airplane in Kitty Hawk, just 15 minutes to the north, and the carcasses of boats from the Civil War and two world wars sit abandoned on the floor of the Atlantic, a few miles off shore.

Though some credit the name Nags Head to shipwrecked sailors hailing from a town of the same name in England, those who love the area favor the tale, recorded in the mid-19th century by a writer from Harper’s New Monthly Magazine, of pirates roaming the beach at night with a lantern tied to the neck of an old nag, trying to lure ships into the shallow waters near the breakers. 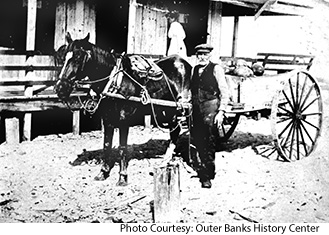 In the center of it all is the village called Nags Head. Established in the 1830s as North Carolina’s first tourist colony, it soon became a summer destination for families living within a day’s boat ride across the Roanoke Sound. Perquimans County planter Francis Nixon is credited with bringing his family to the area in 1830 to escape from malaria prevalent in the fields back home. Docking at an established soundside village near the base of Jockey’s Ridge, Nixon began a summer tradition among relatives and friends that continues to this day.

When Nixon and other planters and merchants from neighboring Bertie, Chowan and Pasquotank counties arrived by boat, they found a scattering of people already on the island. “Bankers,” as they were called, had been living in the area since the 18th century. Likely herdsmen, fishermen and ship salvagers shipwrecked on the barrier island once upon a time, the Bankers built huts in the flats — wooded areas at the base of a line of large sand dunes — earning their living by farming and salvaging wood and other items from sinking ships offshore. 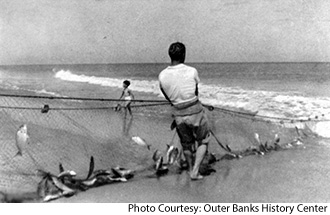 The first tourists brought a boon to the Bankers, who sold fresh vegetables and fish to the summer families, even carrying well-dressed ladies to the ocean in horse-drawn carts over a sound-to-sea boardwalk. The crisp ocean breezes proved to be a continual draw, and the summer tourist trade thrived in soundside Nags Head. Hotels sprang up as early as 1838. Some families built cottages near the Roanoke Sound, choosing the daily sea breezes of Nags Head over the inland summer swelter.

By the summer of 1850, bathers could brave the boardwalk over the scorching sand to the oceanfront, where they swam in the morning. Later they could enjoy bowling at a bowling alley or music and dancing at the Pavilion nearby. In the afternoon, the mail boat arrived, bringing news from home. On Sundays they attended services at All Saint’s Chapel, an Episcopal Church founded by the summer families and consecrated in 1849. The first oceanfront cottage was built here around 1855 by Dr. W.G. Pool of Elizabeth City. Pool is said to have bought 50 acres of oceanfront property for $30 from the Midgetts, a family of Bankers still living in the area today. Pool divided the lots and sold them to the friends of his wife for a dollar apiece so she’d had companionship while she was at the beach, and the Unpainted Aristocracy, a mile-long stretch of oceanfront cottages, was born. By 1885, 13 shingled cottages, many made from scavenged wood, had sprung up within 300 feet of the breakers. 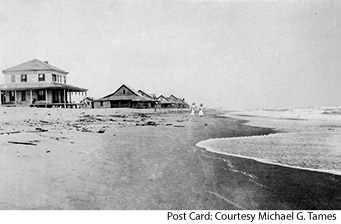 In the early 1910s, cottagers called on a self-taught carpenter from Elizabeth City named Stephen J. Twine to repair and enlarge their summer houses. Twine would build at least another dozen cottages on the Nags Head oceanfront between 1910 and 1935, along with St. Andrew’s By-the-Sea Episcopal Church, transforming the beachfront and in turn defining what would become known as the Nags Head style of architecture. Each cottage, with its hip-roofed porches, built-in benches and propped-shuttered windows, added to the majesty of Cottage Row. The Unpainted Aristocracy has stood sentry against the changing tides of the Atlantic Ocean for more than 130 years. Known officially as the Nags Head Beach Cottage Row Historic District, the collection of close to 40 historic structures is one of the Tar Heel state’s little-known historic secrets, though it has been on the National Register of Historic Places since 1977.